On the 5th of January, our not so little baby turned seven years old. Seven is a really big deal from a Waldorf prospective. Every time my children hit one of these milestones I wonder if I’ve done enough, if I am doing enough for them. There is really not much that can be done either way. The past is the past and there is nothing to do but move on, hopefully learning a bit as we go along.

Iain’s birthday morning was spent pleasantly enough playing pawns (a simplified variation on chess) and practicing archery. Steve took both Iain and Elijah to our usual Friday morning homeschoolers ice skating, while I stayed home with the baby who wasn’t feeling well. Their excursion gave me a chance to put some things in order and set up the birthday table, which I had been too tired to set up the night before. Steve took the boys for veggie sushi at the health food store and then stopped in at a craft store to let Iain pick out his own sketch book.

I really wanted to honor this rite of passage for him. Playing off of the idea in “The Seven Year Wonder Book”, we gave Iain his own “wonder book” for Christmas. Steve picked out a lovely blank book made of recycled paper with pressed leaves on the cover. Every night we began to fill it with little bits of things, poems, lyrics from songs, and pictures. My parents and sisters even added to it. Iain decided that it must be the “rhyme elves” filling his book in the night and was always so excited to see what the latest entry. In the night before his birthday his wonder book disappeared only to reappear again on his birthday table open to a new poem written just for him. 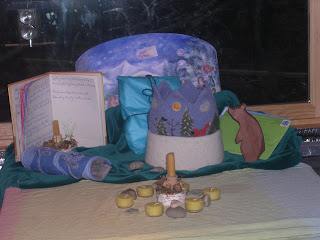 Gently swaying in the breeze
Amoungst the shelter of the trees

The table also held a little winter scene with crystals and rocks, 7 beeswax candles, a rainbow scarf, his presents and cards as well as a crown that I had felted depicting a snowy woodland scene. After we read Iain his new poem and he had a chance to check out the table we sent the big boys to play in the tub while Steve and I made Iain’s favorite dinner and baked his cake. After dinner we started our celebration. 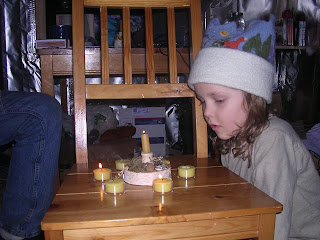 I told Iain’s rainbow bridge story. Iain came to us across the rainbow scarf. After each year he walked around the candles we had set up and Steve lit another.

This is his story:
Once upon a time there was a little star child. For a long, long time he flew from star to star collecting light and music from all around him. One day the little star child went to the sun. It was a place of warmth shining like gold. There the birds, bees and butterflies sang to him of love. Next he went to the moon clean and glowing like new snow. From the moon he saw the most beautiful place- a place of flowers, trees, rolling oceans and two special souls who seemed to be smiling up at him. The little star child decided to use his gifts of light and music to cross over the rainbow bridge where a father and a mother had been waiting for him. And so the star child came to his new home on earth…

And his parents loved him the moment they saw him and they called him Iain Alexander and his name was Iain Alexander. And it was a cool, clear, morning when he was born and the sun smiled down it’s greeting warm and glowing upon him. And everything about him was beautiful.

And then Iain was one. He was a shining golden child with long blond hair and bright blue eyes. He rode snug in Mommy’s starry sling. And he ran around the yard shouting “Dig! Dig!” and eating strawberry tops. And he loved to sail high into the sky on his swing hung from the big tree in the back yard.

And then Iain was two. And he moved to New England and played in the creek and rang the chimes in the lilac. He helped plant all the flowers. Iain became a big brother because Elijah was born. He called him “baby brudder” and ran around in circles to make him giggle.

And then Iain was three. He narrated everything he was doing. He could walk all the way to the big rock and back. He could even climb it too! He sat up high on the pile of suitcases on the train to Pennsylvania and made all of the other passengers laugh.

And then Iain was four. He loved to paint and splash in puddles. He could throw the frisbee to Daddy at the lake hand help Rosie at the library to check out books. He made up little songs to sing. He could walk all the way up to the look outs in the state forest and sled down a hill all by himself.

And then Iain was five. And he helped Daddy stack wood. He could hammer a nail and push himself on a swing and climbed the rock wall at the Fair. He made Mommy and Daddy so proud by being amazingly brave and strong when he had to have the “bumpel” on his nose removed. He would hop on his kick-sled and fly away!

And then Iain was six. And he learned to ride a two-wheeler in a day and decided to try to grow his hair down to his toes. He would spend full days playing never ending war. He could build a birdhouse and knit a scarf. He became a big brother again because Galen was born. He called him “gaily goozel” and made him a ball and a set of blocks and helped to take care of him.

And now Iain is seven and he can shoot with a bow and arrow and strum on a guitar. He can ice skate and carry a baby and write a whole letter. Iain has grown tall and strong and beautiful. He is kind and inquisitive. We are happy to be here with him on his 7th birthday.

At the end he blew out his candles. Then we talked some more about what a big boy he was becoming and how he was no longer a baby. I used body painting crayons to draw symbols on him of qualities that we wanted him to take with him as he ventured out into middle childhood. I drew wings on his feet for to take him swiftly in the right direction, a tree up his spine so that he will grow strong, straight, beautiful and full of integrity as well as many other things. Four days later there are still faint traces of the symbols which he asked not to be washed off. 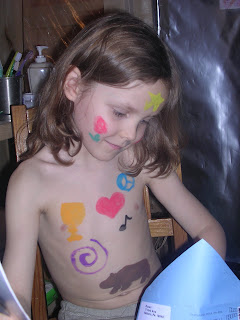 Of course Elijah couldn’t let Iain be the only one with fun drawings! Iain’s celebration was attended by a wildly purring little cat who was greatly displeased at being refused permission to cover his entire body with black “fur”. 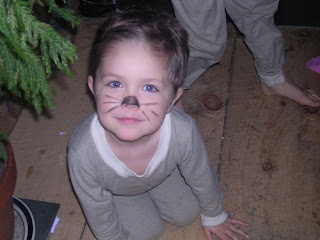 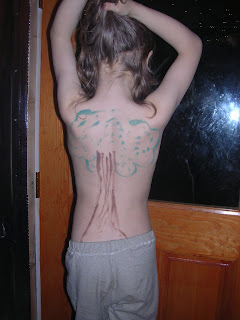 After the ceremony Iain opened cards from his grandparents who live several states away.

We had already given him his big present for the year. My parents brought it up when they came after Christmas. We all chipped in with my parents and my sisters to buy him a guitar. My father who is a professional musician hand choose just the right one for him and we wanted to be sure they were there when he opened it.

So that he had a few things to open on his actual birthday, Steve picked him out a really nice set of colored pencils and I made a felt case for them. Elijah picked out a wooden moose to give from him and Galen. 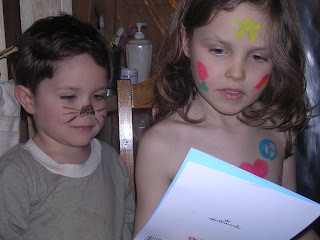 After presents we had the cake. It was an orange glazed, apple cake in the shape of King Winter’s Castle, covered with coconut “snow”. Then we sang two different versions of happy birthday. Tomorrow night we will sing happy birthday again with our homeschooling chorus, with the round that we do to celebrate each child’s birthday. 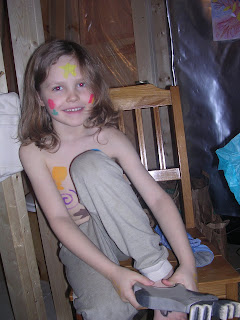 By Melody
celebrations and festivals
2 Replies