I finished remaking Elijah’s doll “Rain”. I took him apart and washed him really well, put fresh stuffing in and sewed him all back together again.

The boys were playing at being kings and queens yesterday and had laid out their “royal robes” before going to bed. I didn’t have any of Rain’s clothes up here so I tied a silk scarf around him and made up a little costume from it. I secured a band of braided gold yarn around his head and left “Prince Rain” by sleeping Elijah all set to join in on the fun in the morning.

I haven’t taken any current pictures of Rain, but here is one from Christmas morning two years ago, when a very sleepy little boy found a strange new playmate in bed with him. Rain looks mostly the same now. Although I still haven’t been able to get out the stain on his face from when he decided to be naughty and play in a pile of ash. Elijah gave him a thorough scolding and he’s remembered not to do it since, but it seems as though the marks are with him for life. Thankfully, Elijah doesn’t seem to mind. For him it’s only added to his charm as well as won him the nickname of “ash-nose”. 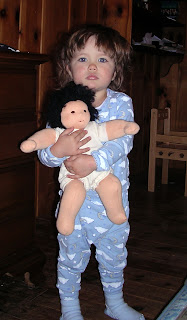 One thought on “Rain renewed….”