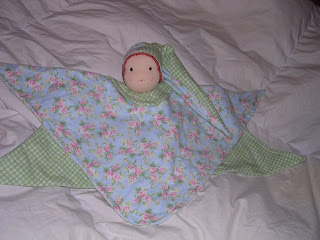 As it turns out after nearly seven years of love and abuse, Iain’s knot doll really couldn’t be saved. I was going to re-make it for him, but the fabric was so worn that there wasn’t actually enough left to sew back together again. He agreed to having me make a new knot doll for him. We went looking for fabric that was similar, but didn’t really come up with anything, so he picked out some that was entirely new. He decided that the doll was going to be a girl named Rose. He found a really soft rose print flannel to use as the main fabric. Then he picked out a heart fabric that reminded him of a blanket he had when he was little. The two fabrics didn’t really go together, so we decided on a third fabric for the contrast and the heart fabric was put aside for making “Rose” a blanket. I’m hoping to be able to make it into a little carrying basket with a pillow and a blanket as a surprise for Christmas.

Iain choose all of the features and details down to the crocheted trim and opting not to actually tie the ends into knots.

As the mother of three boys its very rare that I get called upon to make something “as pretty as possible”, but that was the request with this doll. I did what I could and tried to follow my little designers instructions. He seems happy with the outcome. There is some decorative stitching and such that you can’t really see in the pictures. Now Elijah wants his doll (who also happens to be named Rose, btw) to have trim and roses too! We agreed that I would make him a doll that he designs sometime after the holidays. I’m told that it’s to have a purple velvet dress….I’ve always wanted to make some pretty girl dolls, so something to look forward too…

The fabric is really pretty, very cottage-y. I might make myself an herbal pillow out of what’s leftover!