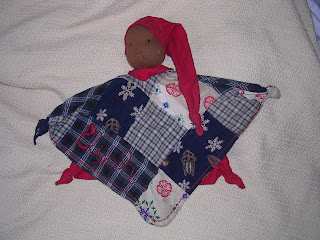 I’m in the process of trying to save my children’s dolls. They have to be made safe so that they won’t contaminate the new house or make the children sick. This is easier in some cases then in others! 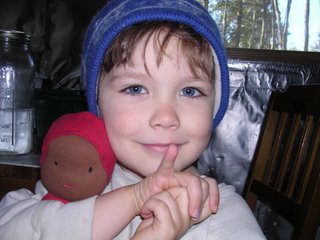 Two nights ago I remade Elijah’s knot doll. “Baby” was a first Christmas present (four years ago now!) with a patchwork body made out of scraps of flannel with “Elijah” embroidered down the side. He’s every so attached to it and has been without it since we moved. I had to replace it’s head, but the body and hat stayed the same, just needed a good washing and a couple of repairs. I tried to make the face exactly as it was and I think that I came pretty close.
I stayed up until 3 in the morning making it. Then I tucked it into bed beside him. There was so much joy and relief in his face when he found “her” in the morning. I think he was worried he would never see her again. They haven’t been apart since! Everywhere he goes she is in the crook of his arm.
Before I had even gotten out of bed that morning Iain had proposed plans for making her a cradle and set off to find scraps of wood. With that all of our school work for the day was canceled. A new little cradle is in progress as well as a small terry cloth pillow, which Elijah has been sewing with baby laying in his lap. The boys deemed it a day to celebrate and who was I to stand in their way? Throughout the day I took pictures of my glowing boy loving his baby. It was such a delight to see him so full of joy! 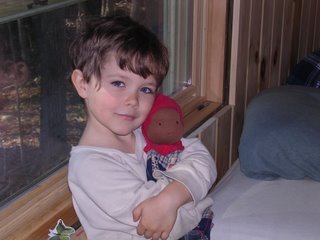